THE ELECTRIC RESISTANCE WELDING OF TITANIUM
Definition
Electrical resistance welding is an autogenous pressure welding process, in which the heat required to bring the surfaces to be welded locally to the synchronization temperature is provided by electrical resistance from the passage of a current through the area to be joined. Welding is performed without filler metal.
Syncrystallisation is the joining of two metal surfaces by the pooling of atoms in the crystalline lattice of the joint area.
Electric resistance welding is carried out by applying pressure to the surfaces in contact by means of devices that are called electrodes as they also serve to carry the current to the pieces to be welded.
Welding is carried out by synchronisation in the area of the mating surfaces through which the maximum current density flows; since the welded area is very limited around a point, it is called the welding point.

General features
The equipment allows welding to be carried out directly in the patient's mouth.
The welding process is electrical, without the addition of material, in an inert gas atmosphere in accordance with Lorenzon's principles. The two electrodes of the clamp are positioned between the two elements to be welded. The energy contained in a battery of capacitors, previously charged, is transferred to the electrodes of the pliers. The current flowing through the contact points between the two parts to be welded heats the material up to the melting point and creates the welded joint.
During the cycle, the melting point is protected by the addition of Argon gas. This prevents the melting point from reacting with the oxygen in the air due to the temperature, producing oxidation and therefore a deterioration in the mechanical properties of the material used.
The heat produced does not reach dangerous levels as it is dissipated through the electrodes by exploiting the higher thermal conductivity of Copper.
During the welding phase the clamp is automatically disconnected from the mains.
The welder has an internal microcontroller that manages the user interface via the buttons, encoder and display; the programmable settings allow the recording of a series of programs (jobs) that can be customised for the various elements to be welded. 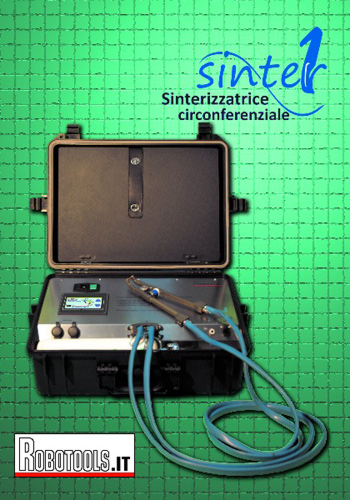